Russian intelligence has spotted up to 12,000 tankers and trucks on the Turkish-Iraqi border, the General Staff of Russia’s armed forces has reported.

“The [aerial] imagery was made in the vicinity of Zakho (a city in Iraqi Kurdistan), there were 11,775 tankers and trucks on both sides of the Turkish-Iraqi border,” Lieutenant-General Sergey Rudskoy told journalists on Friday. 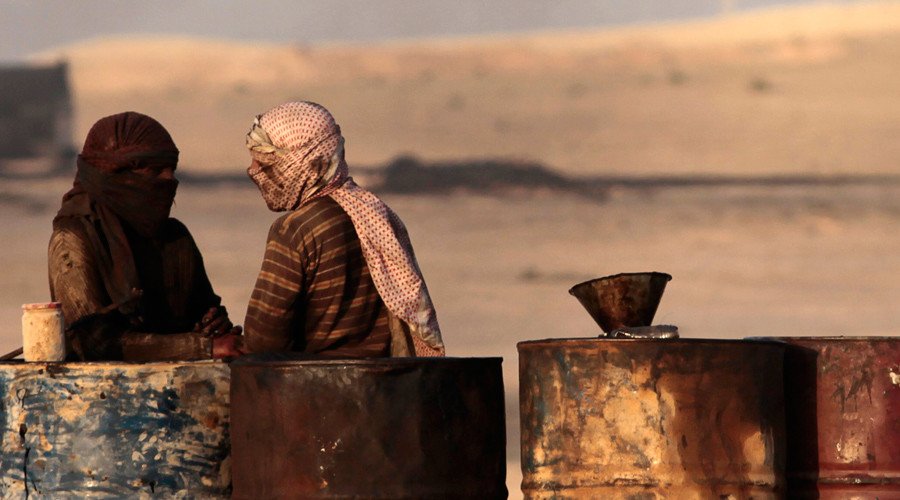 It must be noted that oil from both Iraq and Syria come through this [Zakho] checkpoint,” General Rudskoy said.


Heavy-duty trucks loaded with oil continue to cross the Turkish-Syrian border as well, Rudskoy said. At the same time, the number of tankers on the northern and western routes used for transporting oil from Syria is declining, the general added.


“According to satellite data, the number of oil tankers moving through the ‘northern route’ towards the refinery in the [Turkish] city of Batman has considerably diminished,” Rudskoy said, adding that the number of tankers using the ‘western route,’ between the Turkish cities of Reyhanli [on the Syrian border] and the city of Iskenderun, has decreased to 265 vehicles.

The Russian Air Force in Syria has destroyed about 2,000 tankers used by the Islamists for oil transportation. In the last week, Russian warplanes eliminated 17 convoys of oil tankers and a number of installations used by terrorists for oil extraction and processing.

The Russian Air Force’s effective strikes in Syria have forced the terrorists to look for new routes for crude oil transportation. Today, tankers loaded with oil in Syria’s Deir ez-Zor province, under Islamic State control, are moving towards the Iraqi border in the direction of Zakho and Mosul.


“However, despite a considerable diversion, the finishing point of the trafficking route remains Turkey,” Rudskoy said.


Thank You Kindly to Russia and Vladimir Putin for destroying ISIS resources and doing the job that a usurper in the Presidency Of The United States is pro-actively preventing the various Armed Forces of the United States from doing the very same task, and we all know that it is a legal and indisputable fact that Obama arms and trains and protects them by order (even though legally we are at war with them and their predecessors) and that Obama commits active and chronic TREASON against the Constitution of the United States.  We the PEOPLE of the United States understand that that our Federal Government is too corrupt to impeach or military tribunal or do likewise to remove him from the very office he has no Constitutional legitimacy to hold, despite making this nation into a Nation State sponsoring and promoting terrorism exclusively through this foreign usurper, controlled and assisted by foreign interests and foreign as well as domestic treasonous organizations, factions, and persons.

We the American People thank you Russia, in regard to combating and battling ISIS in Syria.   That to us, is a Christmas gift from you.  Again, Thank You Very Kindly,
and MERRY CHRISTMAS!!!